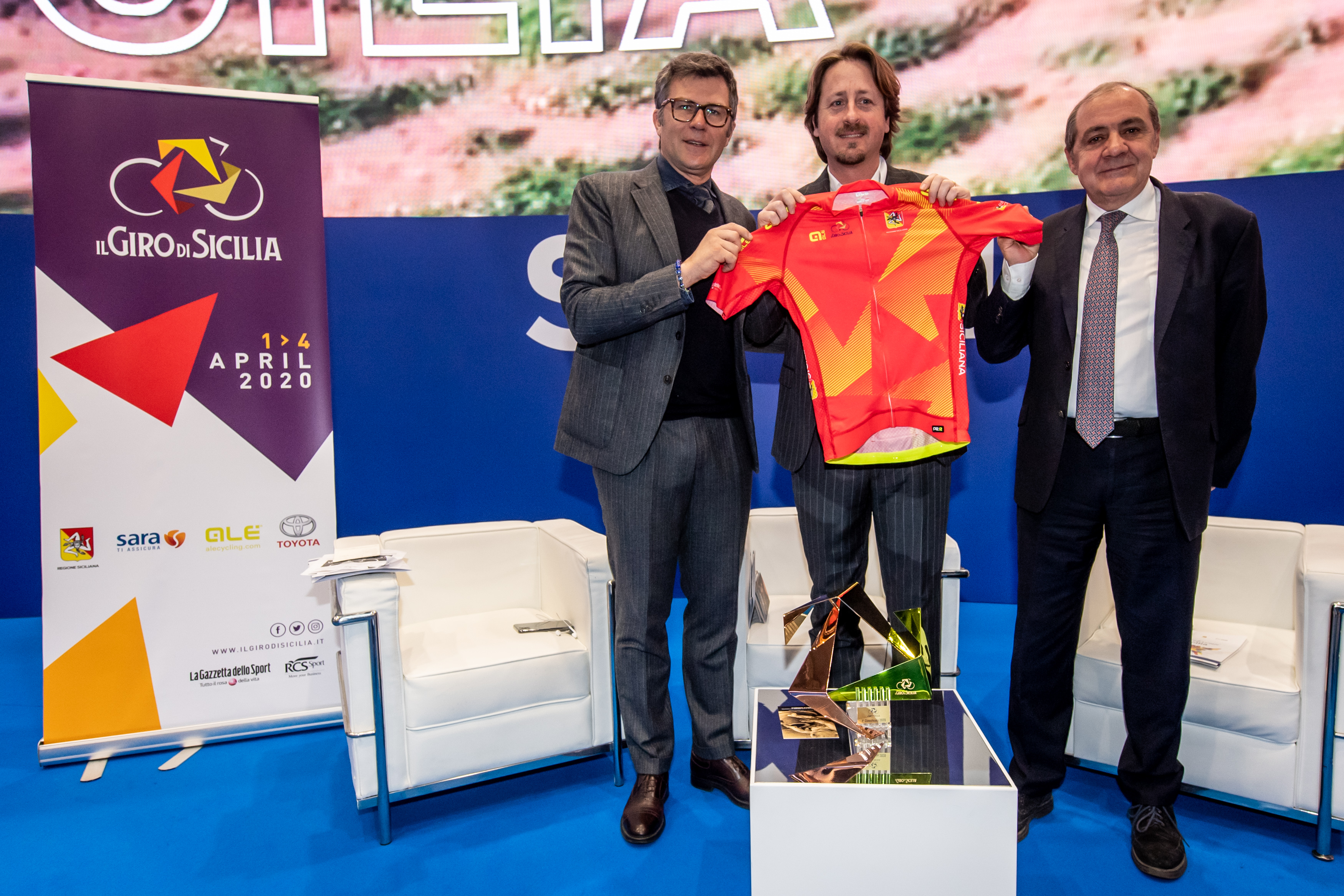 By Simone pozzi 10 February 2020 No Comments

The route of Il Giro di Sicilia – organised by the Sicilian Region and RCS Sport – has been presented, with four stages on the island that will host three stages of the next Giro d’Italia (from 12 to 14 May) and the Grande Partenza of the Giro d’Italia 2021. The event’s host broadcaster, Rai Television, will produce 2 hours of live streaming daily to more than 100 connected countries worldwide. Expected to start: the 2019 winner Brandon McNulty; the 2014 Giro d’Italia winner, Nairo Quintana; the Italian Road Champion, Davide Formolo and the Sicilian, Giovanni Visconti.

The route of Il Giro di Sicilia 2020 has been presented today at the Sicilian Region Pavilion at Milan’s BIT expo. The four stages from 1 to 4 April include a start from Syracuse and finishes in Licata, Mondello (Palermo), Caronia and Mascali, and feature the ascent of Mount Etna from the Piano Provenzana side, the same that will be climbed by the Giro d’Italia in 2020. Other stage starts are from Selinunte (Castelvetrano), Termini Imerese and Sant’Agata di Militello on the island that will host the Grande Partenza of the 2021 Corsa Rosa.

THE ROUTE
Stage 1 – SIRACUSA – LICATA (194km)
The first three-quarters of the stage are wavy, followed by a flat finale. After starting from the coast the route crosses the hinterland before facing the only KOM climb of the day in Ragusa on the way to Ibla. A long section follows, descending mainly on straight roads until reaching the sea at Gela and continuing towards the finish.

Stage 2 – SELINUNTE – MONDELLO (141km)
The stage is characterized by a series of ‘easy’ undulations in the first part before the last 30km where the short but intense KOM climb of Carini is tackled. The route then approaches Palermo along challenging roads, in part markedly downhill, dotted with roundabouts.

Stage 3 – TERMINI IMERESE – CARONIA (178km)
This stage winds through the interior of Sicily and presents an uphill finish. Its wavy undulations follow an uninterrupted succession of bends on roads with variable widths, some with worn surfaces, while the city crossings feature paved sections with various shapes. After Cerda the road tackles the long climb towards “le Petralie” and Geraci Siculo where a very long descent begins, preceding the KOM climb of Pollina (11km at about 6%) and then the short coastal stretch that leads to the final climb, with the last 3km at approximately 6%.

Stage 4 – SANT’AGATA DI MILITELLO – MASCALI (180km)
This high mountain stage has its finish near the sea. Starting on a coastal stretch, the route then climbs the Favoscuro Pass which leads to the slopes of Mount Etna. Next it follows a short, flat stretch to Linguaglossa to tackle the climb of Piano Provenzana, deviating, 2km from the summit (a stage finish in the 2020 Giro d’Italia), towards Milo – with a KOM climb near Rifugio Citelli. A very long descent of almost 30km follows with some technical and demanding sections within the villages and towns.

Nello Musumeci, President of the Sicilian Region, said: “For the second consecutive year the prestigious cycling competition, Il Giro di Sicilia, will take place on the island. My government wanted to continue the collaborative relationship with the RCS Sport group for an initiative that aims to project our region to an international level. We are convinced that the unique and inspirational routes with incomparable architectural beauties, together with the passion for a popular sport with such a long tradition such as cycling, can reach new audiences to produce increased international awareness for the region. In addition to Il Giro di Sicilia, the Giro d’Italia will also return this year with three stages that, in mid-May, will cross the island from west to east. And we’re eagerly anticipating 2021, when the prestigious Corsa Rosa will start right from our region. The best of Sicily is on display!”

Manlio Messina, Councilor for Tourism and Sport of the Sicilian Region, said: “Thanks to the intuition of President Musumeci, we are here today to present a great event, Il Giro di Sicilia, which is also linked to the three stages of the Giro d’Italia this year and to the Grande Partenza of the Corsa Rosa 2021.
“As the Sicilian Region we have decided to focus on these great events: the fact that these races are broadcast in over 100 countries around the world with 2 hours of live streaming from Rai, is a formidable vehicle for promoting our region. I invite everyone to join in and follow the race on the roads or on TV. These international cycling events allow us to showcase our whole territory and contribute to the development of tourism in our beautiful Sicily.”

Paolo Bellino, CEO and General Manager of RCS Sport, said: “In partnership with the Sicilian Region together we have done a great job to bring the Giro d’Italia back to this island and Il Giro di Sicilia to the international cycling calendar. For this year’s edition, Rai will produce 2 hours of live streaming daily. Fans from over 100 countries will be able to appreciate the beauty of the island through the images of an international level race that will help promote tourism, contributing to Sicily’s economy.”

Mauro Vegni, Cycling Director of RCS Sport, said: “Thanks to the work done together with the Sicilian Region, Sicily has now become a cornerstone of international cycling. In addition to Il Giro di Sicilia, this year we will have three stages of the Giro d’Italia on the island and in 2021 the Grande Partenza of the Corsa Rosa will be from Sicily. Some of the biggest names in international cycling will be at the start of the 2020 edition of Il Giro di Sicilia, including the winner of the 2014 Giro d’Italia, Nairo Quintana. We are bringing Il Giro di Sicilia back to its former glory and we want to continue on this path.”