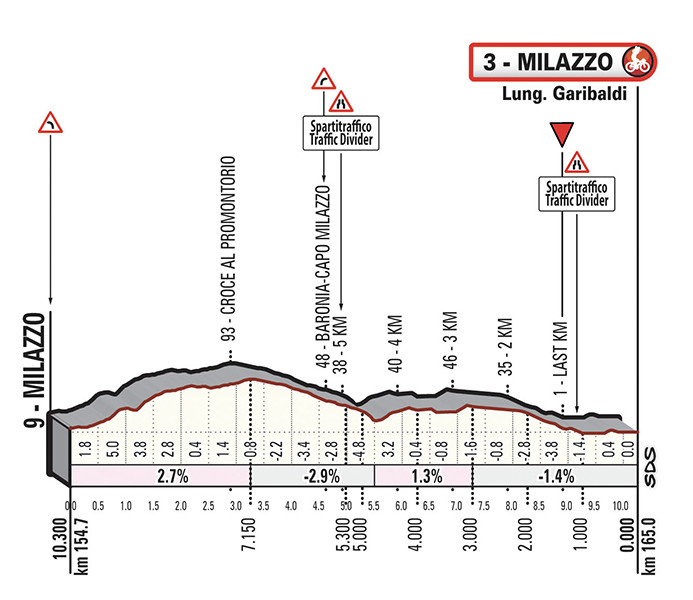 The route is almost entirely flat, except for the Colle San Rizzo climb past Messina. The first part rolls along the coast, with just some mild undulations and an uphill stretch around Taormina. The route levels out after the Colle San Rizzo categorised summit, past Messina, with large roads leading all the way to the final 10 km, raced entirely within the Milazzo peninsula.

The final 10 km run across the Milazzo peninsula, with mild uphill gradients over the first 5 km, and then downhill, with short counter-sloping stretches, over the next 4 km. The last two kilometres are on flat roads. The main obstacles along the route when approaching the town centre are the ones typically found in urban areas, such as traffic dividers at some crossroads. The finish line lies on an 8 m wide tarmac road. 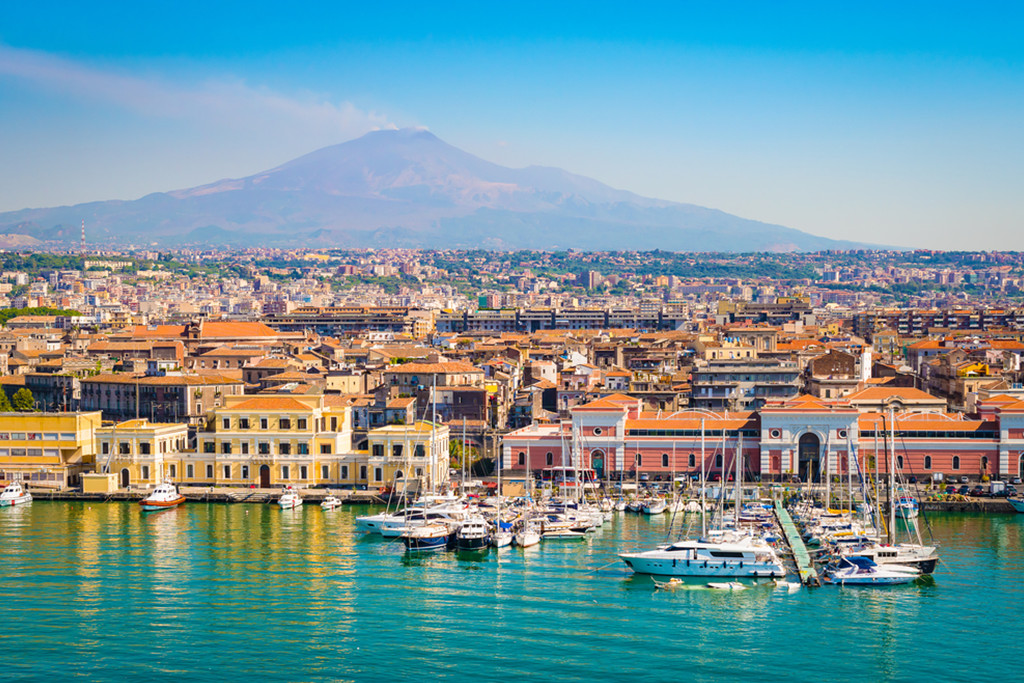 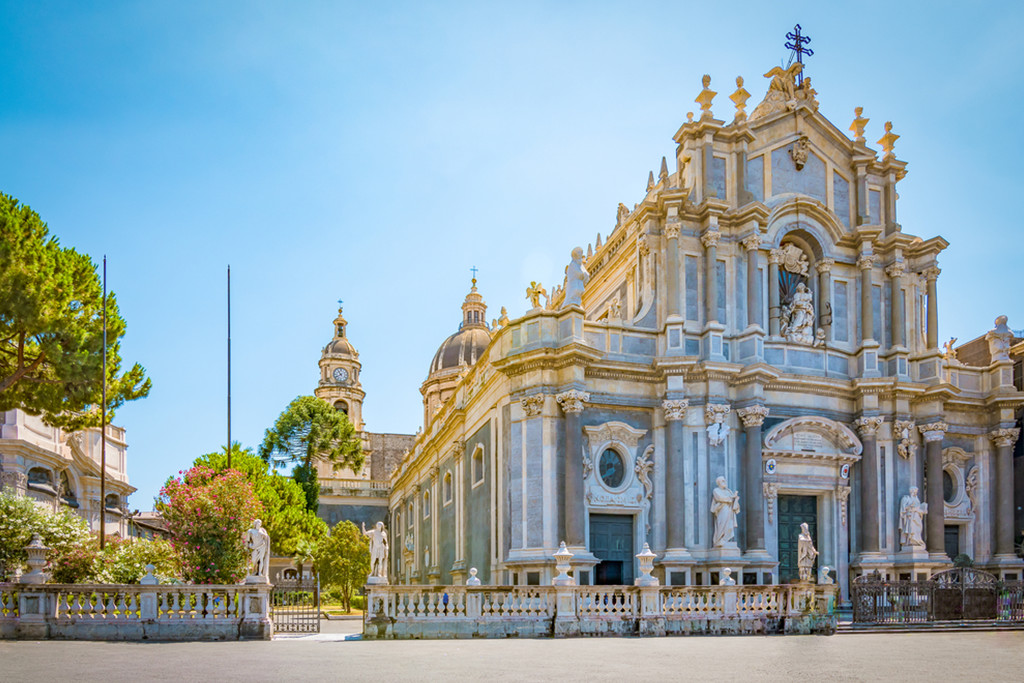 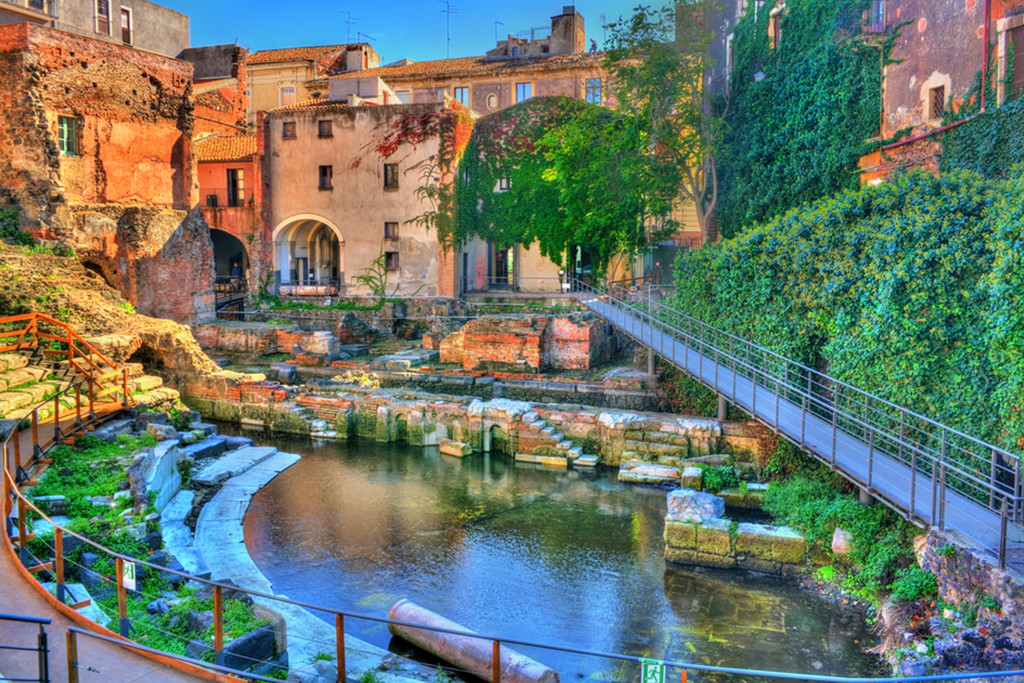 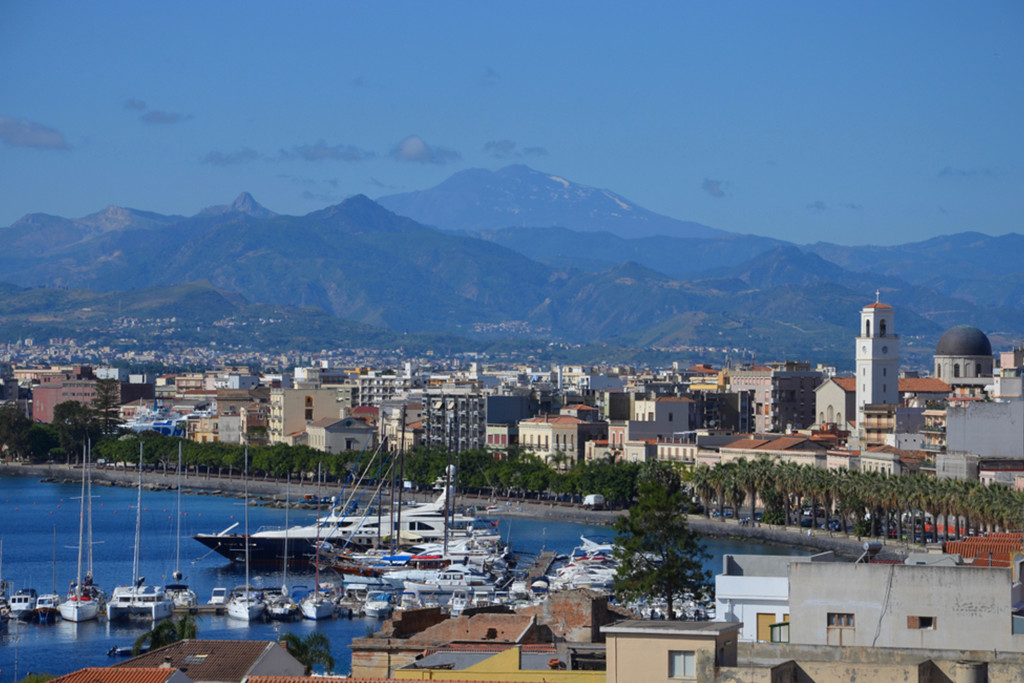 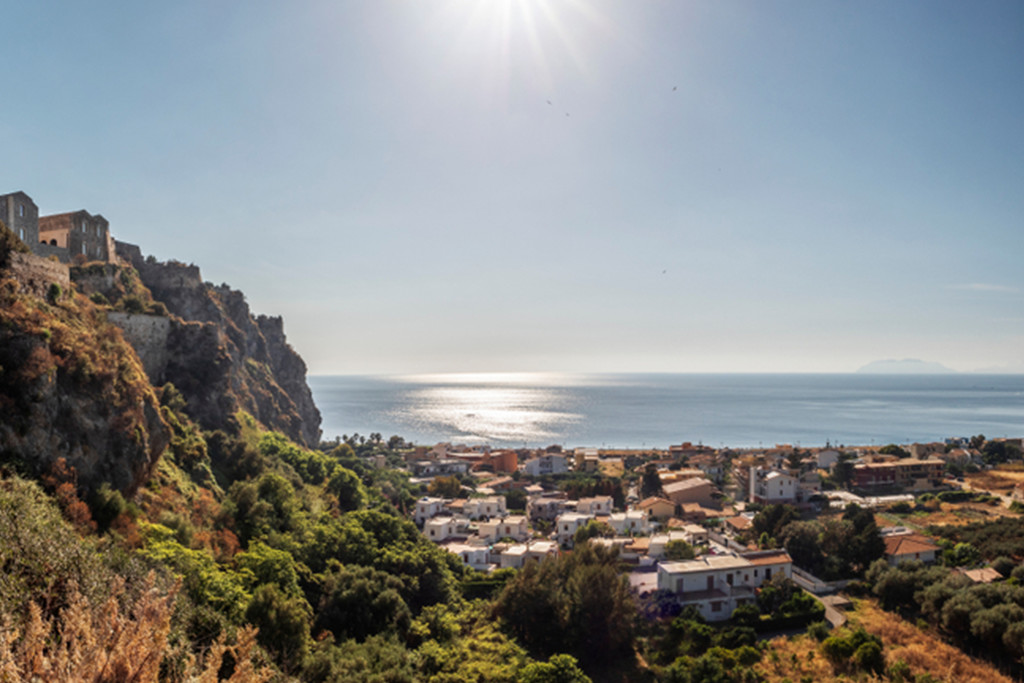 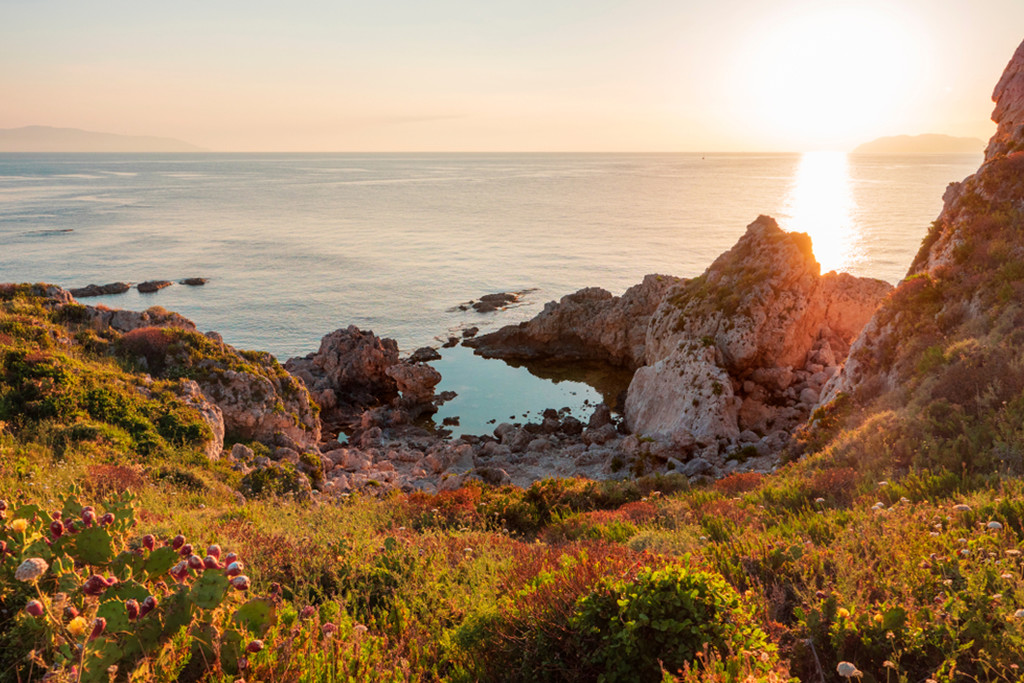 Founded by the Greeks back in 729 B.C., Catania has a diverse cultural heritage, bearing the unmistakable mark of the civilisations that followed one another throughout the centuries: the Greeks, Romans, Byzantines, Arabs, Normans, Swabians, Anjou, Aragonese and the Spanish. The modern city largely reflects an eighteen-century structure, as it was rebuilt after the devastating 1693 earthquake in a distinctive Sicilian Baroque style that has been declared Unesco World Heritage.
The ideal starting point for any sightseeing tour is the central Piazza Duomo, the preferred meeting place for the locals on any solemn occasion, first of all the celebrations for Sant’Agata, the patroness saint of the city. At the centre of the piazza stands the famous Fontana dell’Elefante, with the black basalt elephant (“O Liotru”) that has become the symbol of the city. From here, and looking clockwise, the view ranges from Palazzo degli Elefanti (seat of the City hall) to the Duomo, the former Seminario dei Chierici and the Fontana dell’Amenano. Behind the latter is the picturesque, lively and hectic fish market, la Pescheria. Notable sights inside the Duomo include the tomb of composer Vincenzo Bellini (1801-1835) and the chapel of Sant’Agata with a small room, named cammaredda, which houses a reliquary bust and a casket containing the remains of the Saint.
Piazza del Duomo marks the beginning of Via Etnea. This 3 km long, eye-catching shopping promenade is so-named because it heads towards the Etna, which can be seen from any point of the road. If you are feeling tired and hungry, stop for refreshment at the historic bakery Pasticceria
Savia.
Main sights also include the large Piazza Dante, with the imposing church of S. Nicola and the Benedictine monastery; the gardens in Via Bellini, the perfect place to enjoy the sea breeze at dusk; and Castello Ursino, an ancient Norman fortress, and currently the seat of the Civic Museum.
Do you want to fully discover Catania? Then don’t just admire its wonderful Baroque architecture, but take a mind-refreshing break in one of the numerous beaches of the city, and treat your taste buds to the finest local delicacies. Cannoli, arancini and a wealth of seafood dishes are a must-taste, along with horsemeat, which has become a new fad for the locals. From meatballs to sausages, this is now the most iconic ingredient in Catania’s cuisine, in the spirit of the famous saying “arrusti e mangia” (“roast and eat straight away”).

Guidebooks describe Milazzo, in the province of Messina, as one of the most beautiful villages in Italy. Nestled between two gulfs, and lying on a strip of land that extends towards the Eolian Islands, it is currently a major port for hydrofoils and ferryboats departing for these islands. The oldest historical records date back to the Bronze Age, but the town achieved its utmost splendour under the Sicels, in the 6th century BC. Walking through the old town, however, most of the historical and religious legacy appears to date back to a later age (e.g. the amazing sanctuary of San Francesco di Paola or the 18-century Palazzo dei Vicerè). Culinary delights are based on the finest local ingredient, fish and especially swordfish, served with green olives, capers, parsley, garlic and tomatoes (a gghiotta), or with a mix of oil, lemon, salt, garlic, minced parsley and oregano (sammarigghiu), or used to prepare tasty pasta sauces. The most popular first courses include pasta ’ncaciata – usually penne, served with a sauce made of meat, eggplant and provola cheese, and baked before serving – and pasta ca muddhica, served with anchovies, olives and stale bread crumbs.