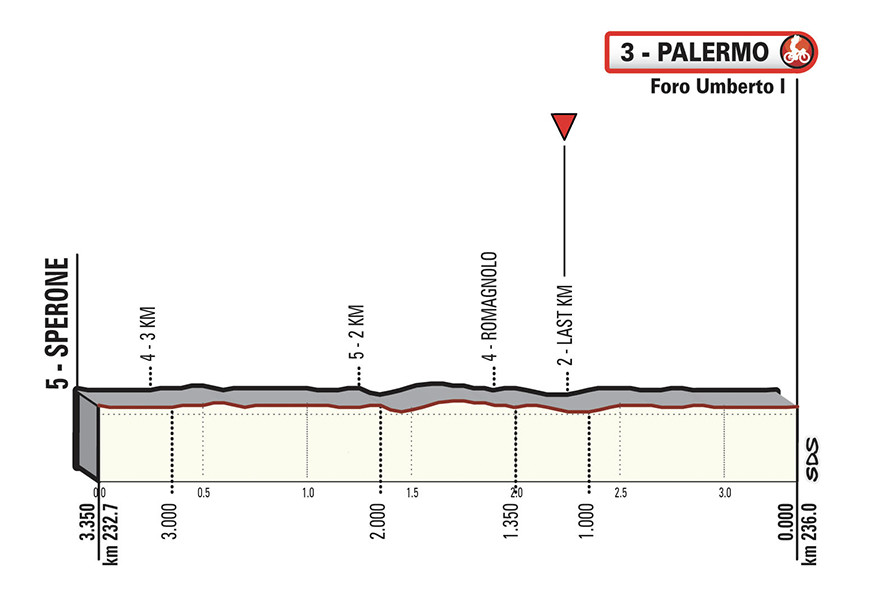 The stage route alternates between flat, mountain and flat roads again. The first part runs along the coast and is quite uncomplicated. The second one runs uphill, in the hinterland, all the way to Geraci Siculo (cat. climb) and Petralia Soprana. The route then drops towards the coast, where wide and flat roads lead all the way to the finish in Palermo.

The stage finale is raced on tarmac, with just a few mild bends and no major obstacles to report. The home stretch is 600 m long, on 7.5 m wide, flat and asphalt road. 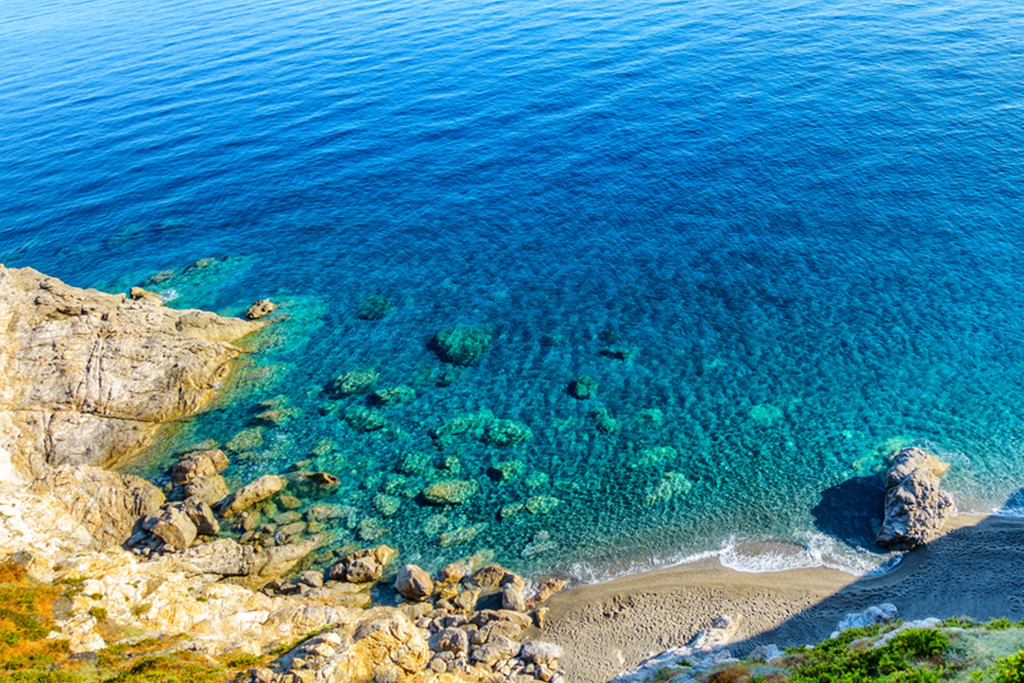 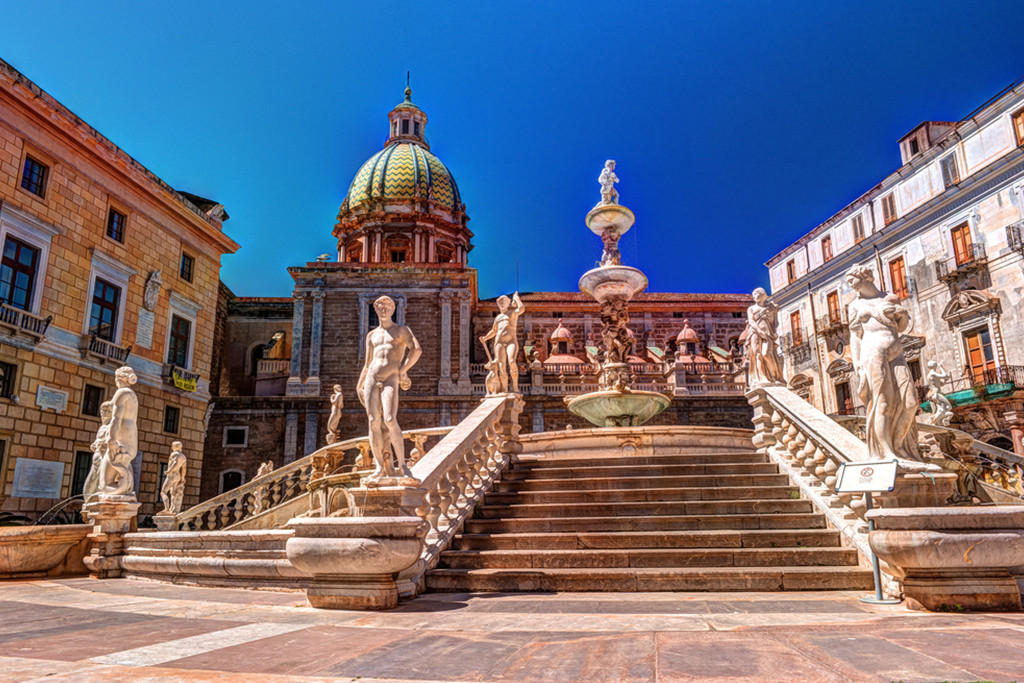 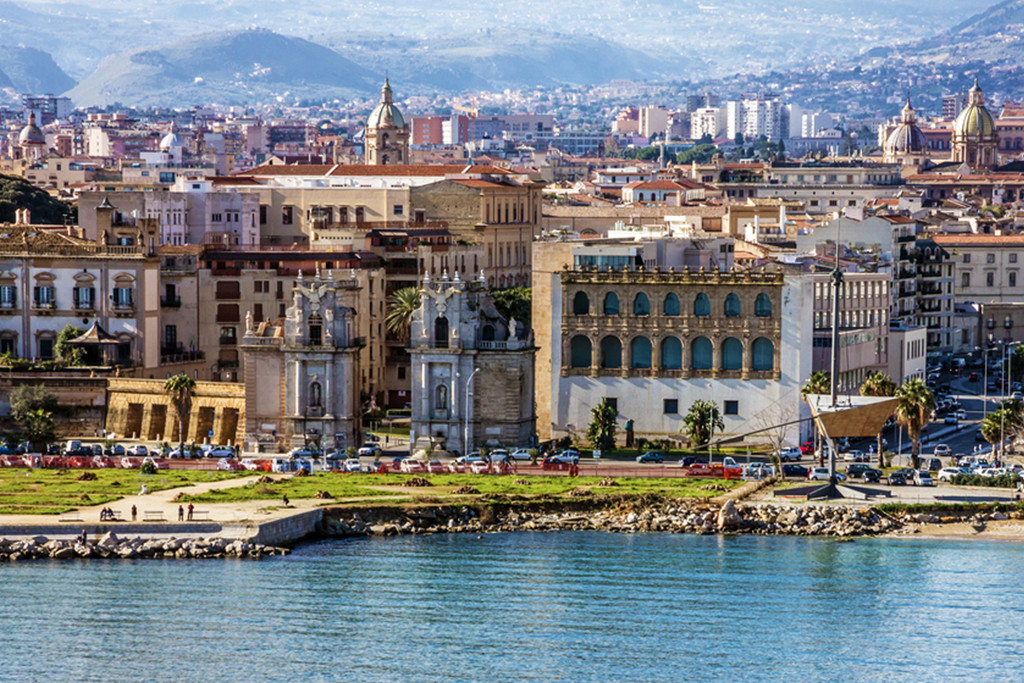 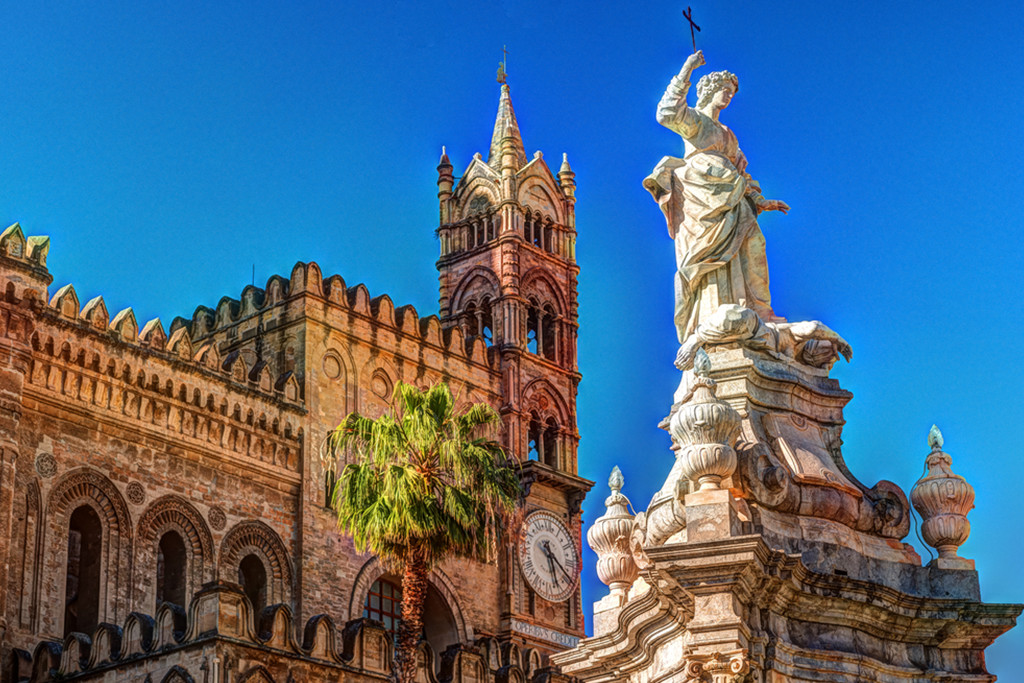 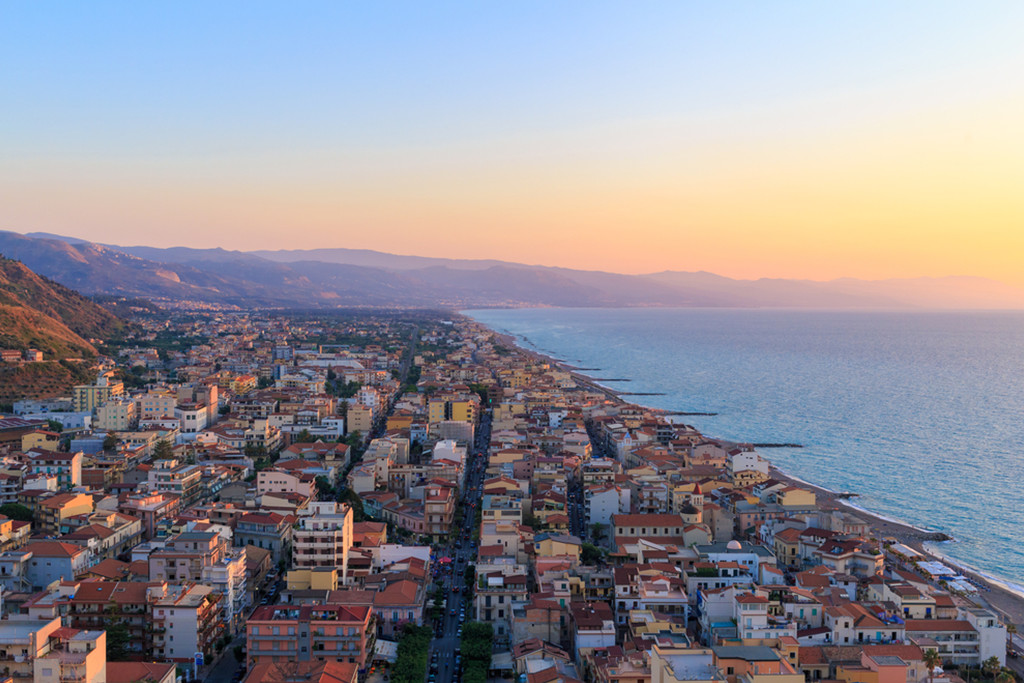 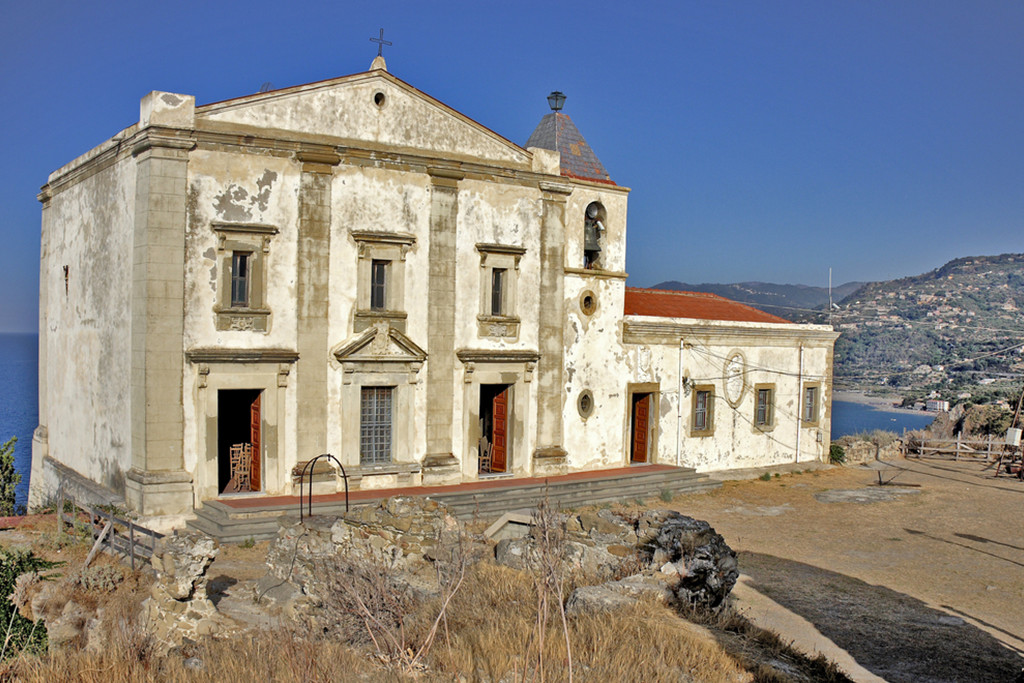 Located in the Nebrodi district, Capo d’Orlando is a traditional fishing village oriented to tourism and trade. The town would have been named after Roland (Orlando), a knight who allegedly stopped here during a Crusade in the Holy Land. The 14-century Castello Bastione, entirely renovated and currently
the seat of a multifunctional cultural hub, stands as one of the symbols of the city. Major landmarks also include the Villa Piccolo museum and library, the art gallery (Pinacoteca), and a unique geological formation, named Cave di Mercadante, that can be seen in the midst of the tourist port when the tide is low. Nature-lovers cannot miss a hike to the lighthouse or a walk along the Sentiero Goletta, which offers a breath-taking view of the surroundings. The promontory is home to a lovely sanctuary dedicated to the Blessed Mary (Maria Santissima). Nearby are the ruins of a castle that King Charles the Great had built – according to legend – to celebrate his knight, Roland. And if you want to make the most of your stay in this quintessential Sicilian city, then you really have to stop in one of the many taverns (osterie) in the old town to treat your taste buds to the finest local delicacies, and savour the authenticity of homegrown food.

Choosing what to visit during your stay in Palermo is no easy task, as this is one of the major art heritage cities in Italy. The good news is that most of the monuments are located inside the historical district, one of the largest in Europe.
The best place to start your tour is Piazza Politeama, the heart of the city, bordered by one of the major theatres in town and a historical pastry shop, Spinnato.
Here you can stop for refreshment and have a taste of the finest local delicacies: arancine, calzoni, pizzette… and a traditional cannolo, to satisfy your sweet tooth. Next stop is the Zisa Castle, one of the major records of the Norman rule in Sicily, later transformed into a residence for the Arab court.
Inside Palazzo dei Normanni (also referred to as Palazzo Reale), among the sumptuous rooms containing invaluable works of art, is one of the most amazing places of the city: the famous Cappella Palatina.
The church of S. Giovanni degli Eremiti, surrounded by the lush vegetation of the inner courtyard, is a must-see jewel of architecture.
Walking down Corso Vittorio Emanuele (the main road of the city, also named “il Cassaro”) until just past Porta Nuova, you will find the Cathedral on your left. The Catalan Gothic façade, the late Baroque dome and the Neoclassical interior are the most renowned works of art of the entire region.
The crossing of Corso Vittorio Emanuele and Via Maqueda, known as “I quattro Canti”, is a glorification of Baroque art, with prominent monuments tightly packed within a radius of a couple dozen metres: piazza Pretoria, with the “Fontana della Vergogna” (literally, the fountain of shame), so-named because of the naked statues that surround it, and the
adjacent piazza, with the splendid sight of the churches of
S. Caterina, S. Cataldo and S. Maria dell’Ammiraglio.
If you walk down Via Maqueda towards the station, past porta di Vicari, and turn right onto Corso Tukory, after a
hundred metres or so you will find yourself at the Mercato di Ballarò, possibly one of the liveliest markets in Palermo. Wander through the alleys (with a marked Arabian style) and the stands, teeming with the freshest fruit and vegetables, meat and fish, and all sorts of street food specialties. Let your senses be overwhelmed by all those colours, tastes, smells and sounds. Is there any better way to end your tour of the city?