It has been a good year for riders from indigenous backgrounds. Neilson Powless of the Oneida nation won the Clásica San Sebastián in July and made the decisive break in the Worlds on Sunday. Richard Carapaz, of Pasto heritage, became Olympic champion and emulated another indigenous rider, Nairo Quintana, proudly Muisca, by finishing on the podium of  the Tour de France. Today another Native American, 22 year old Charles-Étienne Chrétien of Rally Cycling, showed himself by joining the breakaway, winning the only mountain prize of the day, and taking the jersey.

A member of the Innu people (called the Montagnais by their French colonial masters) who live in Quebec and Labrador – territories they call Nitassinan (“Our Land”, ᓂᑕᔅᓯᓇᓐ) or Innu-assi (“Innu Land”) – Chrétien won the Junior Canadian National Championships in 2017 and celebrated with a Juan Antonio Flecha-style “bow and arrow” gesture. He explained after that victory, “That salute means a lot to me and my family. Bow hunting is a tradition for North American Aboriginals. That salute was a kind of connection and gesture of appreciation to aboriginal communities.”

By wielding globalised sport as a defensive weapon against assimilation, these riders are so numerous now they could almost be called a movement.

That said, we all have a heritage. Amore e Vita’s Giacomo Cassarà was born in Arezzo in 1999. The former Umbrian regional junior road champion, his great-grandparents were of Sicilian origin. Cassarà attacked early in the stage, and again inside the final 15 kilometres. Neither move lasted long, but perhaps it was enough for him to honour his family dead.

Matteo Zurlo, whose older brother Federico rode for Lampre and UAE-Team Emirates, lasted rather longer. When Chrétien and Jacopo Cortese called it a day after the intermediaate sprint with 33 km to go, Zurlo pressed on alone. He held off the chasing peloton for 18 more kilometres, although a bunch sprint seemed invitable long before he was caught.

Very close indeed to spoiling the sprinters’ party was Vincenzo Albanese. A rare rider from Oliveto Citra (‘U Lëvìtë’ in dialetto locale), a village of 3 692 near Salerno in Campania, he attacked early, led the peloton under the red kite, maintaaineed his lead around the final corrner with 200m to go, and was only caught inside the final 25m, when Max Richeze, his legs tying up, unleashed Sebastián Molano, who stole past for his third victory of the year and his 16th of his career. 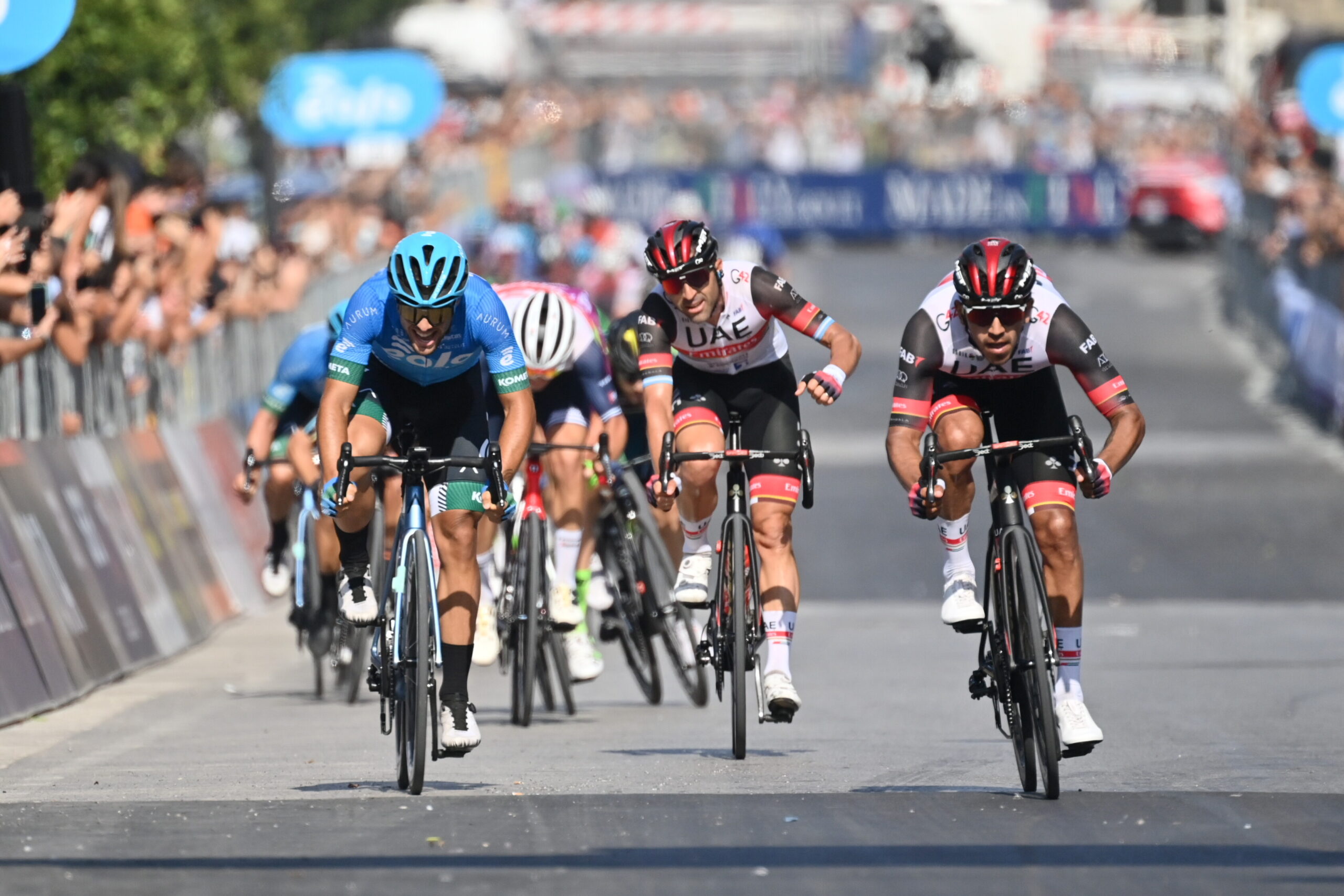 With Colombians first and tenth (Restrepo) and an Argentinian kingmaker, Max Richeze, in third place, it was a good day for the Americas, that continent of immigrants whose arrival is made to seem astonishingly recent by Sicily’s millennial history. A crossroads for trade since it was colonised by the Phoenicians in the 8th century BC, Sicily has seen many conquerors and dynasties come and go. After the Phoenicians came the Greeks. After the Romans incorporated it into their empire, the Arabs conquered tthe island in the 9th century AD. The crowned heads of France, Spain and the Holy Roman Empire at one time or another took charge. Traces of All these influences can be seen in Sicily’s architecture, tasted in its food, heard in its music, and enjoyed in its race routes. Tomorrow’s starts in the classical Greek stronghold of Selinunte, then passes Piana degli Albanesi, where the Arbëreshë community settled in Italy from Albania in the 15th and 18th centuries. Perhaps here, more than anywhere, the festival of difference that is the modern peloton finds its most natural home.