From 12 to 15 April, the island will host the four stages of Il Giro di Sicilia Eolo. Less than a month later, it will then play host to the first stages on Italian soil after the Giro d’Italia’s Grande Partenza from Hungary.

The four stages of Il Giro di Sicilia Eolo 2022 were presented today at the Sicilian regional headquarters in Catania, in the presence of the representatives of the municipalities of Milazzo, Palma di Montechiaro, Realmonte, Caltanissetta, Piazza Armerina, Ragalna and Linguaglossa. This year’s race follows a varied route suited to the characteristics of every type of rider: sprinters, finisseurs and climbers. Less than a month later, the island will welcome the ‘Caravona Rosa’ of the Giro d’Italia, which will arrive from Hungary, with Sicily hosting the rest day and the first two stages on Italian soil after the Grande Partenza.

“With Il Giro di Sicilia and the Giro d’Italia – states the President of the Sicilian Region Nello Musumeci – this spring will be the season of great cycling for our island. After the victory of Nibali in 2021, and the success of the public, we are ready for this new edition of the competition. With great determination, the regional government wanted to bring this ancient race back to life, and the results are now there for all to see: participation, quality of the riders, return of image, tourism promotion. Sporting events like these, in fact, are a key to making our region appreciated all over the world and also attracting new tourist flows. In addition, they represent a vehicle for encouraging basic sports practice, necessary to combat phenomena such as childhood obesity and improve the health of the population, as well as being useful for the individual training of new generations”.

“Once again this year – states the Regional Councilor for Tourism and Sport, Manlio Messina – the historic cycling race will make our island a protagonist, allowing us to promote its beauties in Italy and around the world. The Musumeci government continues to believe with conviction in this great sporting event which, after its pause due to the pandemic, had already brought cycling champions back to Sicilian roads last autumn. With the 2022 edition we are giving continuity to a competition that has its roots over the years: the race returns in the spring and will see athletes of absolute international level at the start. It will be an exciting show, a sort of preview of the Giro d’Italia that allows us to continue to focus decisively on sports tourism, a market segment with great potential. In addition to the Giro di Sicilia and the Giro d’Italia, finally, in collaboration with RCS, we will soon give life to the first edition of a major international event linked to sports tourism”.

Paolo Bellino, CEO of RCS Sport, said: “The union with the Sicilian Region has been consolidated for some years now. Together we wanted to bring back to the island not only Il Giro di Sicilia but also the Giro d’Italia which this year will see the region become a protagonist with the first two Italian stages after the Grande Partenza from Hungary. We still have in our minds the great victory of Vincenzo Nibali over Alejandro Valverde – in the last edition held in October – testifying that great riders love this race. From 12 to 15 April with Il Giro di Sicilia and then from 9 to 11 May with the Corsa Rosa, the whole island will be able to take in great cycling and show the world – through television images – all its beauties”.

The route is wavy, curved and undulating. With the exception of a few kilometres after the start, the stage is played out on the ss. 13, which runs along the northern coast of Sicily. A short, manageable climb up to Tindari after 30 km will be the only topographical impediment, along with a short, steep ascent to Termini Imerese, where sprint points will be up for grabs. A fast final stretch will lead to a bunch sprint.

With 3 km to go, the route leaves the ss 113 and enters urban Bagheria. With 2,400 m to go, the route takes a left-hand turn followed by a right-hander, leading to a wide bend of nearly 1 km on a broad road. There is one last bend leading into the large home straight (350 m), on tarmac. The final kilometres are on a slight incline (average gradient, 1.5%). 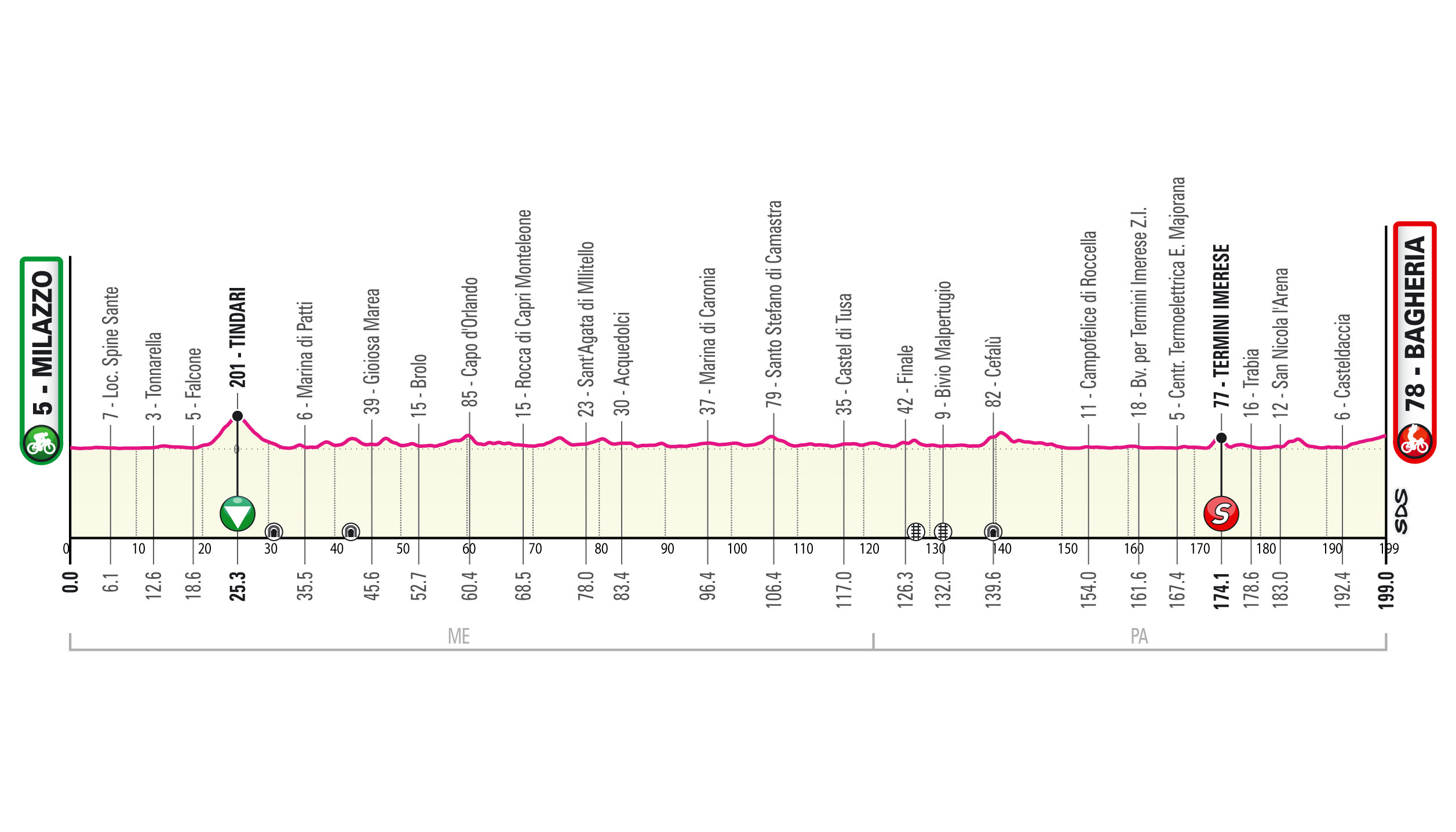 This challenging stage undulates continuously along wide roads, through the inland. Mazzarino, Barrafranca and Enna are the only three urban areas along the route. Here, the roads are narrow at points. KOM points are up for grabs in Enna, at the top of the climb leading to the town centre. The stage finale is played out on wide and well-paved roads, with a short climb leading all the way to the finish, in Caltanissetta.

The route leaves the trunk road, heading for the town centre. The last 3 km ascend slightly with mild gradients (less than 2%). The home straight (500 m) is on wide tarmac. 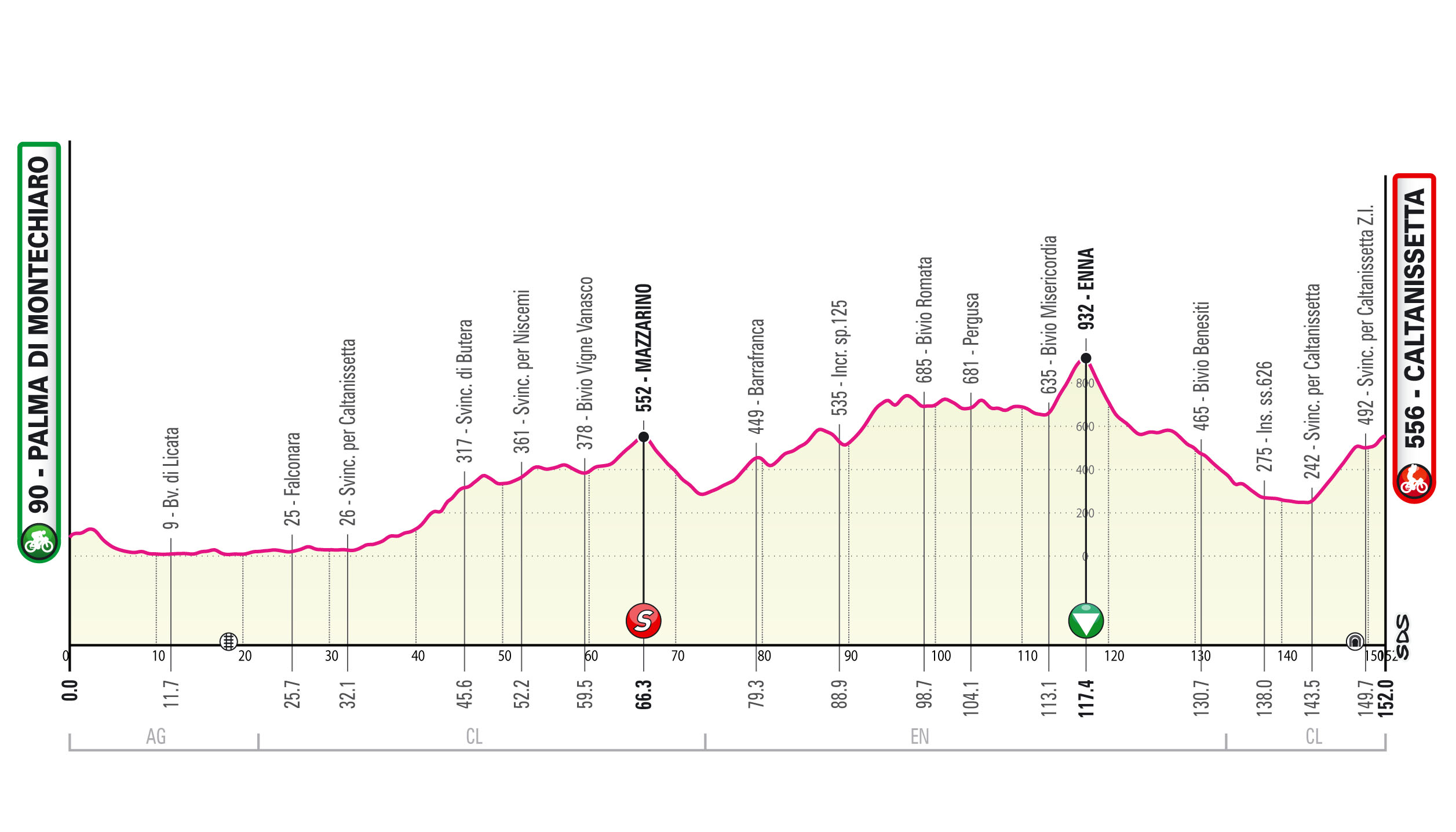 The stage has a very wavy profile. There are no major climbs, but a steady succession of longer and shorter ascents and descents, and just two urban areas along the route. The stage passes through Canicattì, on narrow roads at points, and then takes an uncomplicated pass through Caltagirone. The intermediate sprint will be contested here, at the top of a short ascent. The stage finale runs on a slight incline all the way to Piazza Armerina.

In the last 3 km, the route ascends at an average 5% gradient to reach Piazza Armerina, and levels out in the final 1,500 m, with just two undulations that lead to the closing 200 metres on flat roads. The home straight is wide, on tarmac. 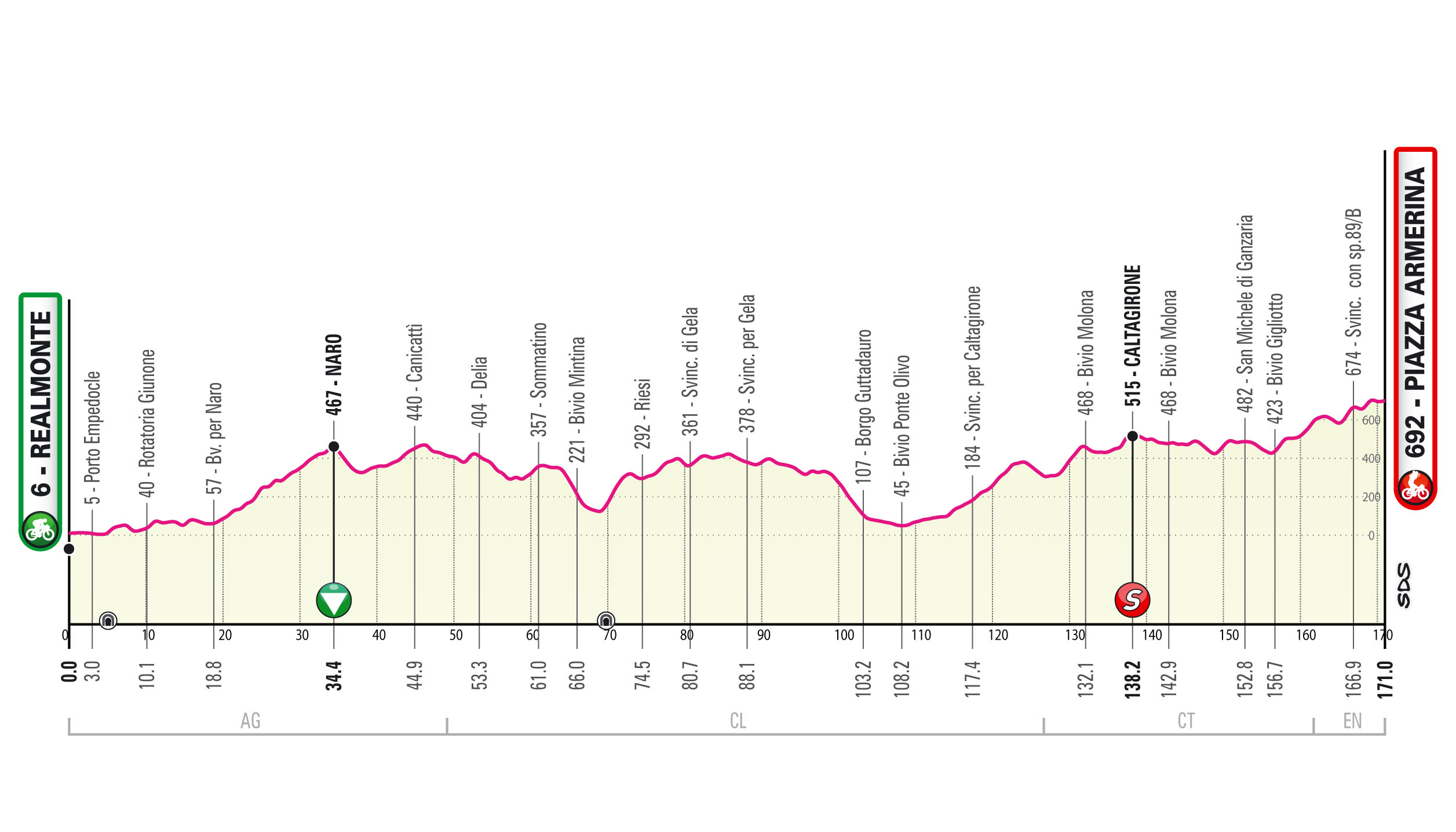 This high mountain stage has nearly no pause for breath past mid-course. The first part is played out on the road that runs around Etna, through Biancavilla, Adrano, Bronte, Maletto and Randazzo. Here, the route starts to climb up the volcano, circling it at a higher altitude, along the sp. Quota Mille. The route takes a technical descent through Linguaglossa, all the way to Piedimonte Etneo, and then tackles the first “Superior” climb of the stage, leading to Contrada Giuliana. Then comes a technical descent through Milo and Santa Venerina, all the way to Giarre. After the intermediate sprint in Mascali, the route takes in a second, different, and somewhat harder ascent to Contrada Giuliana. A short false-flat down after the categorised summit leads to the closing climb (18 km), which starts in Fornazzo.

The closing climb (18.0 km) ascends along the eastern side of the Etna, following a constant succession of hairpins, beside more or less recent lava streams. The mean gradient is 6.0% (considering a short downhill stretch past the fork leading to the Rifugio Citelli), with slopes averaging 9% over the last 3 km (and especially around -2,000 m), and topping out at 11% with 1.5 km to go. The home straight (50 m) is on 6.5 m wide asphalt road. 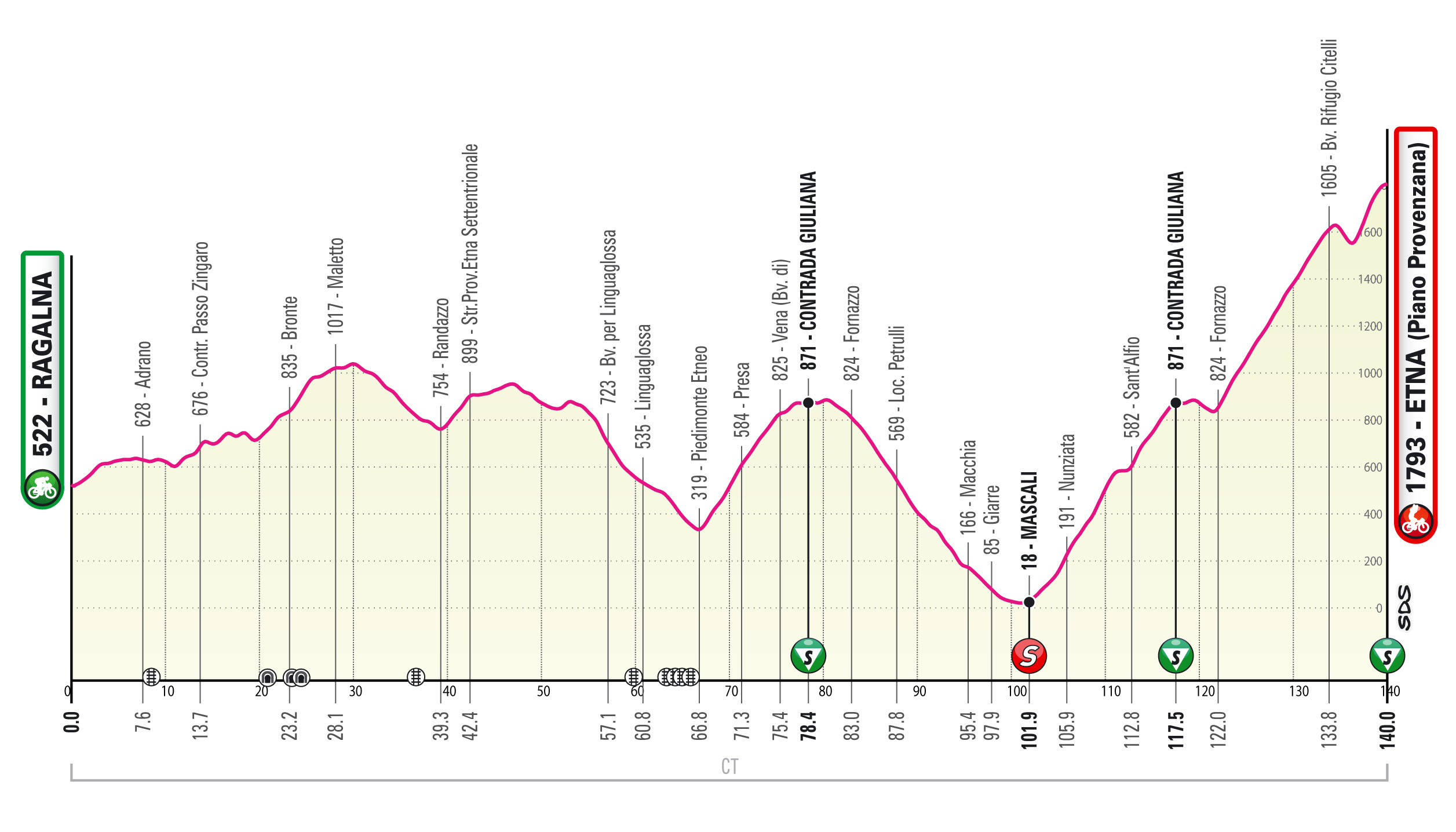